Though Ethiopia is not among the gender friendly countries in the world, it had its fair share of incredible women who were influential in their duties such as Empress Taitu Betul and first female pilot Asegedech Assefa. But as the famous quote goes there were, and still are, so many strong Ethiopian wives and mothers behind every successful man. Here are a top five women arada believe are currently influential in Ethiopia. 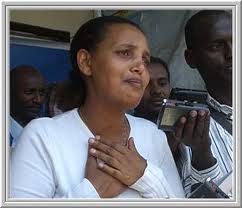 Young, passionate and dedicated to her beliefs Ms. Mideksa came to the spot light of the Ethiopian politics mostly dominated by men during the 2005 election wind. Known for her charisma, calmness and respectful behavior Ms. Mideksa was elected as the vice president of the opposition CUD. After the election violence Ms. Mideksa was arrested with fellow leaders of CUD and after her release became president of an opposition party UDJ. Then again she was arrested by the government for an “alleged” violation of her probation and spent 22 months in jail before she was released again in October 2010. Currently Ms Mideksa is continuing her graduate study in United States after being awarded the Reagan-Fascell Democracy Fellowship. 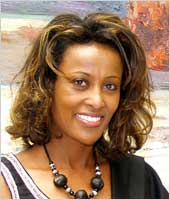 One of the pioneers of women’s and children right in Ethiopia, Meaza is known for her dedicated work to assist helpless women against abuses. In a country where women were less privileged that the men in social aspects, Meaza paved the way to bring harmful practices against women to the main stream media of Ethiopia by encouraging women to speak up against abuses. She founded the Ethiopian Women Lawyers Association, organized awareness creation activities about her goal through out the country and was involved in setting up political debates during her time as director of Inter Africa Group. With a dream of empowering women, she recently was the force behind the establishment of the first women oriented private bank, Enat Bank. Meaza’s efforts are widely recognized and she received a number of awards including African Prize Laureate 2003 and International Women of Courage Award for Ethiopia in 2008.

Founder of the first orphanage in a country where there are a number of orphans, Mrs. Gobena took her compassion to the orphans to the next step and started helping few kids. With a careful management and incredible love to the orphans, her orphanage grew to care for around 12000 kids. Some people even call Mrs. Gobena the African Mother Teresa comparing the similarity of a religious obligation that started  their positive influence. Mrs. Gobena is trully a wonderful mother and continue to expand her influence to fight HIV/AIDS, develop communities and empower women. Mrs. Gobena was awarded an Honorary Doctorate from JImma University for her continued commitment to provide humanitarian support. Check the official website of the organization to support Mrs. Gobena.

Born in Ethiopia and raised by her parents in different countries around the globe Eleni brought her vast experience in agricultural economics to start the first commodity exchange in Ethiopia. She is the founder and CEO of the Ethiopian Commodity Exchange, established to modernize the market around agricultural products inorder to help the farmers. Through her dedication, management and mobilization skills she was able to create a strong market system that gets better by days. Her first-class management skills were observed in the quality of team she assembled to manage the commodity exchange and her vivid interaction with all sectors involved in the commodity exchange.

In the currently competitive world of business, no one would expect this young woman would one day be one of the most successful business owners selling her products all over the world via internet. What started as a plan to make modernized recycled tire shoes, commonly used by the poor, by using the artisan skills of her neighborhood, grew into an environmentally responsible product with an Ethiopian flare that is sold in over 30 countries worldwide.