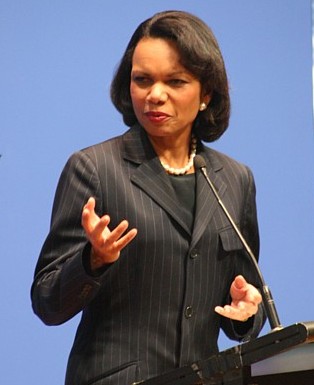 Condoleezza Rice was born on November 14, 1954, in Birmingham, Alabama. She grew up surrounded by racism in the segregated South, but went on to become the first woman and first African-American to serve as provost of Stanford University. In 2001, Rice was appointed national security adviser by President George W. Bush, becoming the first black woman (and second woman) to hold the post, and went on to become the first black woman to serve as U.S. Secretary of State. (She was the nation's 66th Secretary of State, serving from January 2005 to 2009.)

In 1993, Rice became the first woman and first African-American to serve as provost of Stanford University—a post she held for six years. During that time, she also served as the university's chief budget and academic officer.

In the mid-1980s, Rice spent a period in Washington, D.C., working as an international affairs fellow attached to the Joint Chiefs of Staff. In 1989, she became director of Soviet and East European affairs with the National Security Council, and special assistant to President George H.W. Bush during the dissolution of the Soviet Union and German reunification. In 1997, she served on the Federal Advisory Committee on Gender-Integrated Training in the Military.

A few years later, in 2001, Rice was appointed national security adviser by President George W. Bush, becoming the first black woman (and second woman) to hold the post. She went on to become the first black woman to serve as U.S. Secretary of State—she became the nation's 66th Secretary of State in 2004, following Colin Powell's resignation, and served from January 2005 to 2009.

As Secretary of State, Rice has dedicated her department to "Transformational Diplomacy," with a mission of building and sustaining democratic, well-governed states around the world and the Middle East in particular. To that end, she has relocated American diplomats to such hardship locations as Iraq, Afghanistan and Angola, and required them to become fluent in two foreign languages. She also created a high-level position to de-fragment U.S. foreign aid.

Rice's books include Germany Unified and Europe Transformed (1995) with Philip Zelikow, The Gorbachev Era (1986) with Alexander Dallin andUncertain Allegiance: The Soviet Union and the Czechoslovak Army (1984).

In August 2012, Rice and South Carolina businesswoman Darla Moore became the first women to (simultaneously) become members of the Augusta National Golf Club, located in Augusta, Georgia. The event was monumental. The club, which opened in 1933, had infamously been known for its all-male membership and repeated failure to admit women.

Just a few weeks later, on August 29, 2012, Rice attended the Republican National Convention in Tampa, Florida, showing her support for the Republican Party's 2012 election candidates, Mitt Romney and Paul Ryan. Rice delivered a riveting speech on the second day of the convention, spurring positive media attention: "I think my father thought I might be president of the United States. I think he would've been satisfied with secretary of state. I'm a foreign policy person and to have a chance to serve my country as the nation's chief diplomat at a time of peril and consequence, that was enough," she said, adding that her future plans focus on being an educator, not a politician.

"I'll go back and be a happy Stanford faculty member," Rice said. "And, obviously, I'll do what I can to help this ticket. But my life is in Palo Alto. My future is with my students at Stanford and in public service on issues that I care about like education reform."