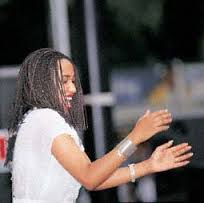 Aster Aweke was born in Gonder, near Lake Tana, in Northern Ethiopia and raised in the capital city of Addis Ababa. At a very young age, Aster realized her passion for singing. As a teenager in a society that did not place a high premium on the singing profession, her decision to undertake a musical career was a difficult one to make. She knew that her choice to pursue a high-profile role in music, especially as a woman, would mean traveling a long and lonely road.Aster launched her professional singing career at Hager Fikir Theater.

In the late 1970’s, she began performing at Addis Ababa night clubs, cultivating her songwriting and singing technique and emulating Aretha Franklin, Donna Summer and other Western vocalists whose records were popular in the local discos. She performed at various clubs and hotels, including Hotel D'Afrique, Wabi Shebelle and Ras Hotel, accompanied by the Continental Band, Shebele Band, and Ibex Band (before they became known as the Roha Band).Aster began her recording career in Ethiopia with two 45 vinyl record releases, followed by nine cassette releases. Her last cassette, Munayë, was released in 1981, coinciding with her departure from Addis Ababa to the United States. This recording cemented her status as an enduring musical tastemaker among music lovers in Ethiopia.Upon arriving in the United States, Aster settled in northern California.

Believing that she had left her musical career behind her in Ethiopia, she focused on continuing her education. Clearly, this decision was very difficult for her, as she truly loved the profession of music. Of this period in her life, Aster says, “I was miserable!” Luckily, her friends persuaded her to return to the stage and 20 seconds into her first song, she recognized her true calling. “I found my happiness was in singing,” Aster recalls, and she moved across the country to the Washington D.C. area, which has a large and well-established Ethiopian community. There, she began singing in various Ethiopian restaurants.

In 1985, Aster was on the move again, performing for enthusiastic Ethiopian audiences in cities across North America. In the late 1980’s, Aster was discovered by the London-based independent label, Triple Earth, an event that marked her entrance into the World Music scene. Shortly thereafter, she secured a recording contract with Sony Music Entertainment and released two major albums, Aster and Kabu, on their Columbia label. Following her widespread popularity in the United States and Europe, Aster appeared on several radio and TV shows, including the acclaimed Night Music on the NBC television network, where she appeared as a special guest of the host, David Sanborn, one of America’s musical trendsetters. She has also appeared on CNN, BBC radio and television, PBS radio and television, CBC, and London’s Channel 4 Big World Café. Print appearances include Time, Newsweek, The Washington Post, The New York Times, and the Los Angeles Times. Aster not only performs, but also writes and arranges music in her own unique style.

To date, Aster has released a total of 20 albums, six of them on CD – Aster, Kabu, Ebo, Aster Aweke Live in London, Hagerë, and Sugar. While five of the CDs were recorded in various studios, the Live CD was recorded on September 16, 1996, during a sold-out concert at the prestigious London club, Hammersmith Le Palais, celebrating the Ethiopian New Year (1989 A.D.). A music video of this concert has been made, as well. Since her first CD release, Aster, she has performed for audiences at the New Orleans Jazz Festival, the Hollywood Bowl, and various European festivals. Aster has shared the stage with renowned singers and performers, including Hue Masekela, Maria Makeba, Mano Dibango and Bradford Marsalis.Aster has just completed her seventh album on CD, a compilation of timeless songs recorded over the last 25 years.