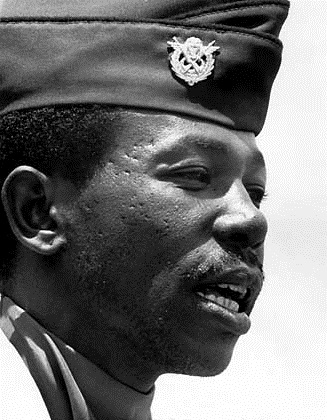 Mengistu received officer training at Holeta and additional training in the United States. Rising to the rank of major, he became one of a group of junior officers and enlisted men who, discontented with their lack of patronage and promotion within the military, plotted rebellion against the government of Emperor Haile Selassie I. In June 1974 Mengistu was made chairman of the Armed Forces Coordinating Committee (known as the Dergue), a committee of revolutionary soldiers, and, after the arrest of the emperor in September, he was made a vice-chairman of the Provisional Military Administrative Council (PMAC), which was run by the Dergue and which assumed the functions of government. On November 23, 1974, Mengistu ordered the assassination of the PMAC’s moderate chairman and urged the killing of 60 aristocrats and former officials of the old imperial regime. By killing selected enemies within the PMAC, Mengistu became the acknowledged strongman of a regime that proceeded to nationalize industries and farmlands.

In February 1977 Mengistu, now a lieutenant colonel, survived a battle between his supporters and those of rivals on the PMAC. The chairman and several other members were killed, and Mengistu became head of state and chairman. He then unleashed a bloody “Red Terror Campaign” to crush armed opponents among the civilian populace, and later that year he solicited Soviet weaponry and Cuban troops to repel an invasion of the Somali-speaking Ogaden region by Somalia. As undisputed ruler of the country, he oversaw the establishment of the Workers’ Party of Ethiopia in 1984, the drafting of a constitution for Ethiopia in 1986 (endorsed in 1987), and the election by a new national legislature of himself as president in September 1987. By then Mengistu faced armed rebellion in the northern regions of Tigray and Eritrea, a series of the worst droughts and famines ever to afflict Ethiopia, an agricultural economy ruined by the forced collectivization of farms and the relocation of entire populations, and occasional coup attempts by enemies within the regime. The withdrawal of Soviet support further weakened Mengistu’s power, and in May 1991 he summarily resigned his post and fled to Zimbabwe.

Successor Ethiopian regimes unsuccessfully lobbied the Zimbabwean government for Mengistu’s extradition on charges of genocide. Tried in absentia, he was found guilty of genocide in December 2006 and was given a life sentence the next year. Following a successful appeal from the prosecution, which argued that Mengistu’s crimes merited more than a life sentence, in May 2008 he was sentenced to death.